Home of the 72oz Steak Challenge 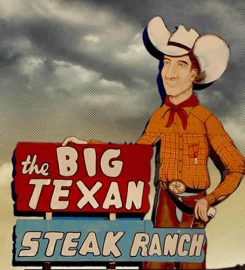 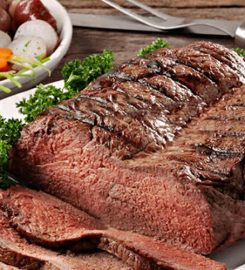 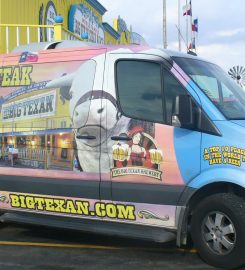 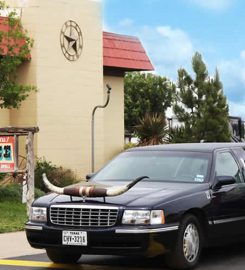 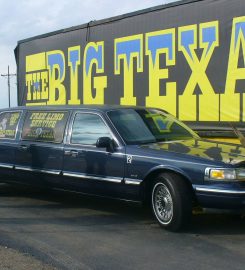 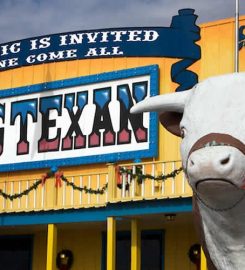 BIG TEXAN is home of the 72oz Steak Challenge as well as a famous landmark of must visit places on Route 66 check out this article of all the interesting places to visit on the 2,000 rode trip from LA to Chicago.

How the FREE 72oz STEAK DINNER legend was BORN…

Soon after the original Route 66 Big Texan open it’s doors in 1960, owner Bob (RJ) Lee was amazed at how many REAL Texas Cowboys, were coming in for his HUGE TEXAS SIZE STEAKS, that his menu offered. He also saw how much fun his out of town patrons & visitors were having watching these true Texans trying to “out do” each others carnivorous appetites. Most of his Big Cowboys dinners came from a near-by stockyard operation, & would stop in after a long days work. Friday’s was payday at the stockyard & he would cash their paychecks & offer 25 cent beer.

One Friday, he put several tables together in the center of the dinning room & sat all the cowboys together & told them he wanted to see who could eat the most one pound steaks in an hour. The cost was $5 per eater & whoever ate the most got to keep the entire entry-fee.

The rules were simple; you could not get up during the contest or have anyone help you eat, you did not have to eat the fat & if you got sick, you were out.

The cowboys put in their money,took a seat & the contest was on, steaks were flying.

One of the eaters took the lead by swallowing two steaks in ten minutes.
Next,he politely requested a salad & a shrimp cocktail be served with his third steak. He consumed the extras, then this soft spoken giant called for his fourth steak & ask for a baked potato & a bread roll. He wasted little time on devouring those items & called for his fifth steak.

The 54-unit, AAA-rated property is conveniently located adjacent to the Big Texan Steak Ranch on Interstate 40. We’re less than 5 minutes from Rick Husband International Airport, with easy access to the highway and all the area’s attractions.

Designed to resemble a main street in an old west town, the Big Texan Motel combines the comforts and conveniences of today with the ambiance and decor of the late 1800s. The Motel office is open 24 hours a day. Our friendly staff can point you in the direction of local events and activities; assist you with access to the washers and dryers located on the property; baggage handling; or arrange a wake-up call.

All rooms are equipped with basic cable and HBO and most of our rooms offer two queen-size beds. We also have rooms with Texas-size beds and Jacuzzi tubs. From May through September, you can take a refreshing dip in our full size Texas-shaped swimming pool.

There’s plenty of room-side parking available at the Big Texan Motel. If your rig is bigger than most, we have a lot just north of the property where you can easily park a bus, a travel trailer or a semi-truck.

“Please ask for our free limo service when you make your reservations. Weather permitting.”

Groups receive extra-special attention at the Big Texan Motel. We’ll personally greet the guests when the motorcoach arrives, and treat group members to a reception in the hotel lobby. Big Texan hospitality begins with the first call you make to our sales staff, and continues until our staff waves goodbye as you’re leaving the parking lot.

Entire meal must be completed in one hour. If any of the meal is not consumed (swallowed)…YOU LOSE!

Before the time starts, you will be allowed to cut into the steak, and take one bite. If the steak tastes good and is cooked to your satisfaction, we will start the time upon your acceptable approval. The time will not stop, and the contest is on, so make SURE before you say “yes.”

Once you have started you are not allowed to stand up, leave your table, or have anyone else TOUCH the meal.

You will be disqualified if anyone assists you in cutting, preparing or eating of your meal. This is YOUR contest.
You don’t have to eat the fat, but we will judge this.

Should you become ill, the contest is over… YOU LOSE! (Please use the container provided as necessary.)

You are required to pay the full amount up front; if you win we will refund 100%.

You must sit at a table that we assign.

If you do not win the steak challenge, you are welcome to take the leftovers with you.

No consumption or sharing of the leftovers is allowed in the restaurant once the contest is over.

If you fail to complete the challenge, you must pay the full $72 dollars.

No visit to the Big Texan Steak Ranch is complete without a stop at the unique Gift Shop where you can come face-to-face with a LIVE Rattlesnake. Folks are always welcome to browse through the inviting displays of familiar and exotic items featured at our Trading Post. You'll find a wide range of Big Texan trademarked items, from t-shirts and hats to playing cards and glassware. There's a plentiful selection of mounted longhorns and item made from rattlesnake skins are plentiful rattlesnake. The merchandise selection also includes collectibles, novelties, books, postcards, magnets, belts, hats, and plenty of toys for the youngsters and the "young at heart." Route 66 enthusiasts are delighted with the variety of memorabilia they find at the Big Texan Gift Shop. We carry hundreds of items that bring back the nostalgia of the Mother Road, including Route 66 signs and apparel.

Claim is not valid selection as plan already selected. Please check your dashboard to see status of your listing.

Claim request is processed after verification..

Your request has been submitted successfully. 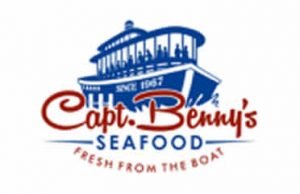 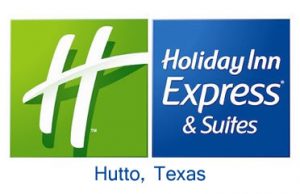 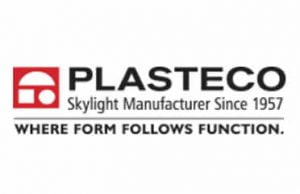 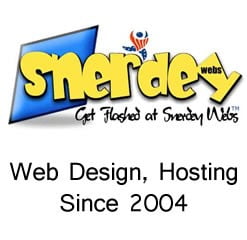